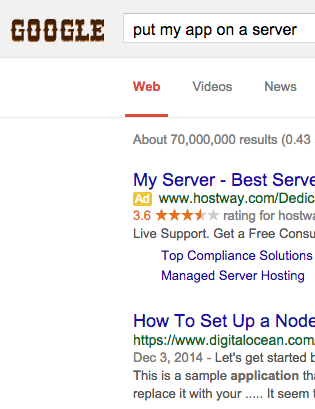 Hey, Ruby web developers! Having trouble asking deployment questions? Not sure what Provisioning or Orchestration are? Getting bad results Googling your questions, but not sure why?

Let’s go over some deployment vocabulary from your point of view — that makes it a lot easier to Google and to read information about deploying your app to a server, and setting up that server in the first place.

As a nice side effect, you may have an easier time talking to your Ops guy at work.

First, let’s go over what the word “deployment” means:

(Developers are going to keep using the word “deploy” for everything involved in getting our app and its dependencies installed. That’s cool. But don’t be surprised if you confuse your Ops guy.)

Ruby developers often use Capistrano or Mina for deployment.

The word ‘Provisioning’ is normally used by Ops folks to refer to getting computers or virtual hosts to use, and installing needed libraries or services on them. They use the word for a lot of other things as well, such as buying access to network bandwidth, but you can probably ignore that.

The thing to remember is that ‘deployment’ does not, as a rule, include ‘provisioning’.

Ruby developers often use Chef, Ansible or Puppet for server provisioning. This can also be done automatically by a service like Engine Yard, Heroku or (briefly)NineFold (but NineFold seems to be gone).

Orchestration means arranging or coordinating multiple systems. It’s also used to mean “running the same tasks on a bunch of servers at once, but not necessarily all of them.”

The most common orchestration tool for Ruby programmers is Capistrano, followed by Mina.

Orchestration tools include Fabric, MCollective, Salt and many more. It’s pretty common for your Orchestration tool to also be a provisioning tool (Salt, arguably Ansible) or an app deploy tool (Capistrano, Mina), or potentially something else as well.

Of course, that’s only if you don’t count SSH, the most common orchestration tool of all :-)

Config Management is part of provisioning. Basically, that’s using a tool like Chef, Puppet or Ansible to configure your server. “Provisioning” often implies it’s the first time you do it. Config management usually happens repeatedly.

Config management tools normally take “facts” to make true about the server – “make sure /etc/my.cnf contains this” or “NGinX should be running with the following config files.” The facts are accumulated into modules (“cookbooks” in Chef). But that’s what a module is made of.